Moody’s Analytics chief economist Mark Zandi, of course, disagreed. Back in May, Zandi came to Fortune with a bold proclamation: The Pandemic Housing Boom had peaked and we were entering into a “housing correction.” A housing correction being a period where the housing market—which got priced to 3% mortgage rates—would work towards equilibrium. It’d see home sales volumes fall sharply. It’d also, Zandi said, put much of the nation at risk of a home price corrections.

Fast forward to September, and it looks like Zandi’s housing correction call was spot-on. Not only is housing activity declining across the board, but some markets, like Austin and Boise, are already seeing falling home prices. This week, Fed Chair Jerome Powell acknowledged that the U.S. housing market is entering into a “difficult correction.”

Peak-to-trough, Moody’s Analytics now expects U.S. home prices to fall between 5% to 10%. In significantly “overvalued” housing markets, that forecasted drop is now between 10% to 15%. If a recession hits, Moody’s Analytics expects that U.S. home price decline to widen to 10% to 15%, and the drop in significantly “overvalued” housing markets to range between 20% to 25%.

Where can we find these significantly “overvalued” housing markets? Well, just about everywhere.

During the early phase of the Pandemic Housing Boom these frothy markets were heavily concentrated in Sun Belt and Mountain West boomtowns. However, as the housing boom carried over into 2022, many markets on the West Coast, Midwest, and Northeast also began to reach frothy valuations.

Historically speaking, frothy housing markets (i.e. significantly “overvalued” markets) are at the highest risk of home price declines during a housing market correction. After all, that’s why Moody’s Analytics updates the analysis each quarter.

If this housing correction—which was spurred by a 3 percentage point jump in mortgage rates—had occurred two years ago, far fewer housing markets would’ve been at risk of home price declines. Back in the second quarter of 2019 (see chart above), just three major regional housing markets were considered significantly “overvalued.”

The first group includes frothy markets like Austin (where home values fell 7.4% between May and August), Boise (down 5.3%), Denver (down 4.3%), and Phoenix (down 4.4%). Those markets saw deep-pocketed WFH buyers from cities like San Francisco and New York drive home prices far beyond what local incomes would historically support. These are exactly the types of places Moody’s Analytics deems high risk.

The second group are high-cost tech hubs like Settle (where home values fell 3.8% between May and August), San Francisco (down 7.8%), and San Jose (10.6%). Relative to local incomes, those markets are not significantly “overvalued.” Those tech hubs are, however, hit by a double whammy. Not only are their high-end real estate markets more rate-sensitive, but so are their tech sectors.

When will these housing markets bottom out? According to Zandi, it could take another 12 to 18 months before this home price correction concludes.

*”The Moody’s Analytics housing valuation measure is the percent difference between actual house prices and house prices historically consistent with wages and salaries per capita and construction costs. The price of a house is ultimately determined by the value of the land upon which it resides which is tied to the opportunity cost of the land as measured by wages and salaries, and the cost to build the home. Nationwide, approximately one-half of a home’s value is the land and the other half the structure, but this varies considerably across the country.  In San Francisco, for example, the land is far and away the biggest part of the home’s value, while in Des Moines, Iowa, it is the opposite. Our housing valuation measure accounts for these differences,” writes Moody’s Analytics chief economist Mark Zandi.

Sign up for the Fortune Features email list so you don’t miss our biggest features, exclusive interviews, and investigations.

Sun Sep 25 , 2022
Flamingo pink walls in a Greek seaside apartment and a living space in Italy defined by primary colours feature in our latest lookbook, which collects colourful living rooms that are designed to stand out. From the pastel colour palette used in a Tokyo dwelling to the clash of reds and […] 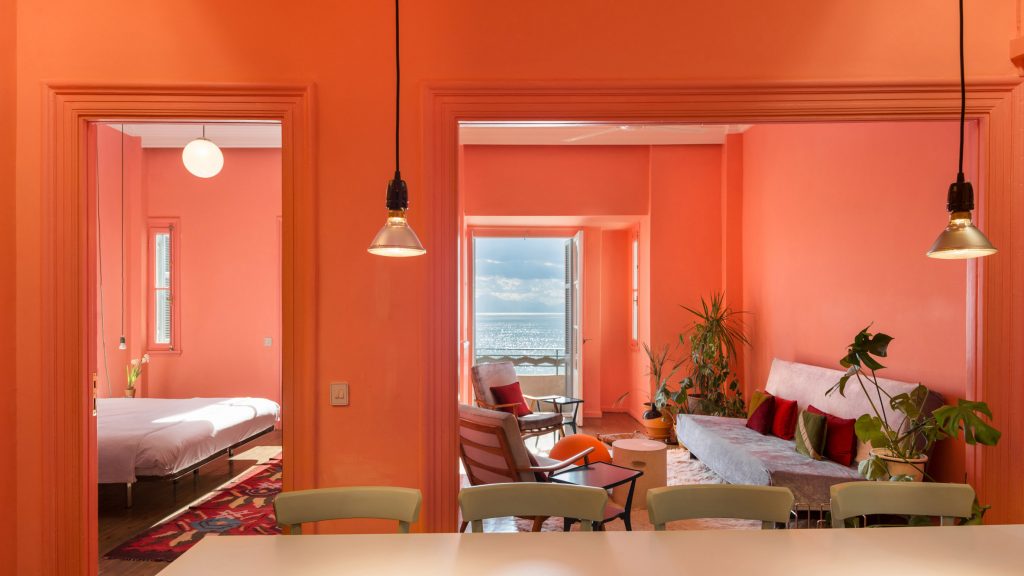