Katy Krebs and her husband, Michael, were looking for a place to call their own when an old shed that used to belong to Michael’s grandparents caught their eye.

The Krebs had been renting for about seven years. When the coronavirus pandemic hit, they decided it was time to find a place they could call their own, especially since they were getting older and have two daughters: Carolina, 7, and Harper, 3.

They didn’t have to look far to find the solution.

The couple had inherited 70 acres of land in Fayetteville, Texas, from Michael’s grandparents. The property includes agricultural land — and a small, rundown shed.

“We thought the shed was the perfect thing to fix up and make into a tiny home, where we could live while saving up some money so we can have money for the forever house,” Krebs, a stay-at-home mom, told Insider.

They plan to live in the tiny home until they have enough savings to renovate and move into the main house, which had been his grandparents’ home.

With a tight budget, the couple took on most of the renovation work themselves, including installing partition walls, adding windows, and restoring the roof.

After cleaning up the leftover items in the shed, they started dismantling the internal walls.

“We took the plywood walls and the plywood ceiling off, and it still had insulation that was in great shape,” Krebs said. “We were able to retain the original flooring too as they were in excellent condition.”

There were originally three windows in the shed. The couple decided to add two more to improve ventilation and let in extra natural light.

“They were old aluminum windows, so we just popped them out and put in new vinyl ones,” Krebs said.

They also vaulted the ceilings in what would become the living room and kitchen area.

On the outside, the couple gave the roof a new coat of galvanized paint meant to protect it from rust and corrosion.

The shed’s exterior walls were repainted as well.

“You can tell the shed was definitely old and the paint was dry-rotting, so we had to scrape all of that off,” Krebs said.

To save money, they tried to reuse old material that was already sitting on the property, including lumber.

“We put in a beam that we found in an old barn out in the pasture on the property,” Krebs said. “We also took all the wood off of that and used it as our ceiling.”

They even repurposed an old barn door as the front door of their new home.

“The door was in such great shape when we found it, so I just sanded it down and put a window in it. I didn’t even paint it,” Krebs said. “I thought that would be perfect for the tiny house.”

The entrance to the shed was originally on the back side, but they wanted to change the orientation of the building.

“What we did was we covered that old entrance up and cut a hole out on the front side of the building to put the new door,” she added.

One of the biggest challenges the couple faced during renovation was creating new walls to partition the space into rooms.

Krebs and her husband first needed to agree on a floor plan. Where there had initially been one open space, the couple sectioned off two rooms from the combined kitchen and living area to create a bedroom and a bathroom.

After they got that out of the way, it was time for the dirty work.

“We looked on YouTube a lot to figure out how to do this and how to do that. We did all the framing ourselves — it was just us, me and Michael, with our two girls by our side,” Krebs said. “It’s a good thing my husband knew what he was doing.”

Friends and family members chipped in to help whenever they could.

“We started in September of 2020 and we finished in May of 2021,” she added. “Our family members and friends helped us with different aspects of the renovation, so it was a fun project with everybody involved.”

Though the couple did get an electrical company to link the house up to the main electricity source, they did the rest of the wiring themselves.

Krebs has been documenting her tiny-home experience on her TikTok account, which has about 9,500 followers.

Krebs estimates they spent about $16,000, which was within their original budget.

“We knew we wanted to be under $20,000, so thankfully we managed to complete it before the price of everything got more expensive,” she said.

Even though they renovated during the coronavirus pandemic, the couple did not run into any major supply-chain issues.

“Building the home during the pandemic really wasn’t that bad, probably because we reused a lot of the old lumber and other materials that we already had lying around,” she said. “We have a local home-improvement store too, and thankfully they weren’t really backed up on the supplies either.”

The completed tiny home has three rooms and is filled with rustic furniture.

“Right when you walk through the main door, the open kitchen is on the left and the living room is on the right,” Krebs said. “Then we have a doorway that walks into the bedroom, which is 70 square feet, and then to the left is the bathroom.”

The bathroom has a shower, a toilet, a vanity, and a closet hidden behind a curtain.

“My husband’s cousin tiled the shower in about a week, while my husband built the closet area by installing shelves into the wall,” Krebs said.

An external vendor installed and connected the tiny home’s new septic system to the main house on the property.

“We have one full-sized bed and a couch that folds out into a bed, so we don’t really have a set place somewhere where everybody sleeps,” Krebs said.

On some nights, it could be her and her daughters in the main bedroom, and other times they’ll be out on the couch, she added.

While this flexible sleeping arrangement works for her and her family, it has drawn criticism from other social-media users on TikTok.

“I’ve gotten a few hate comments about where my kids sleep and I’m like: ‘It’s OK. I know they’re safe. They have a safe house — they have a bed,'” she said. “But I tell people it’s not forever. They’re going to have their own room in the big house in the future — this is just temporary.”

After designing her tiny home from scratch, Krebs has some advice for anyone looking to do the same: Draw out all floor plans before starting.

That includes details like the location of electrical outlets and the light fixtures.

“We wanted our AC in the bedroom, but it ended up being in the living room. That set our plans back because now we have this big galvanized piping in the front where the porch is,” she said. “At first I didn’t really like it, but now I don’t notice it as much, but it’s definitely a reminder to have everything drawn out before you begin.”

The family has now been living in the house for almost a year. Krebs says it’s been a rewarding experience for all of them, especially her daughters.

“They downsized on a lot of toys, and they don’t stay cooped up indoors every single day,” she added. “They can go outside and ride, and we have our own chickens, cows, a pig, and dogs, so it’s nice for them to be outside to explore.”

Thu Jul 21 , 2022
CHESTERFIELD COUNTY, Va. (WRIC) — A woman in Chester wants to warn others after she lost thousands of dollars after hiring a contractor who failed to complete the job. Pam Worner has lived in her home for seven years, and renovating her porch and deck was the last home improvement […] 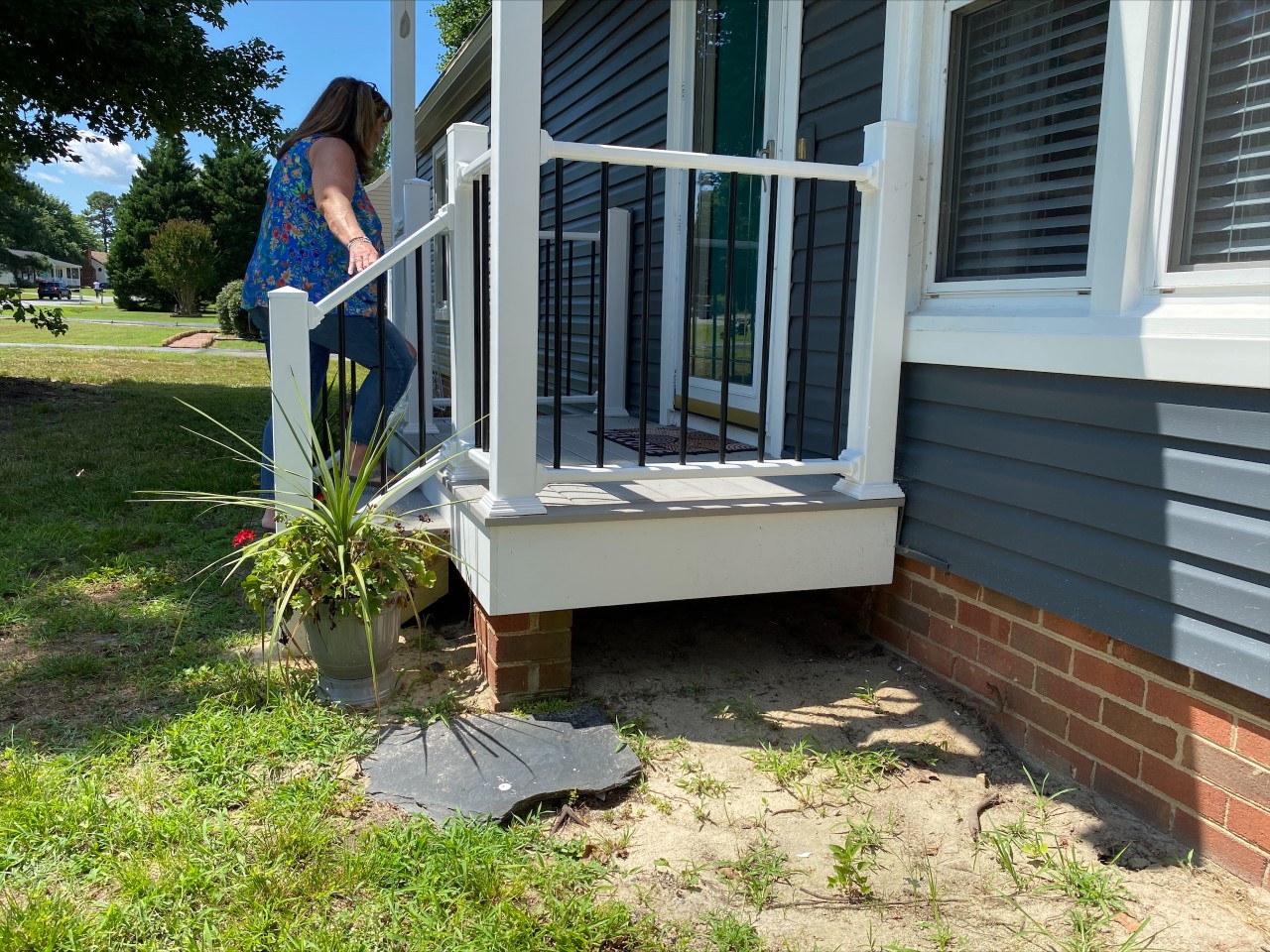