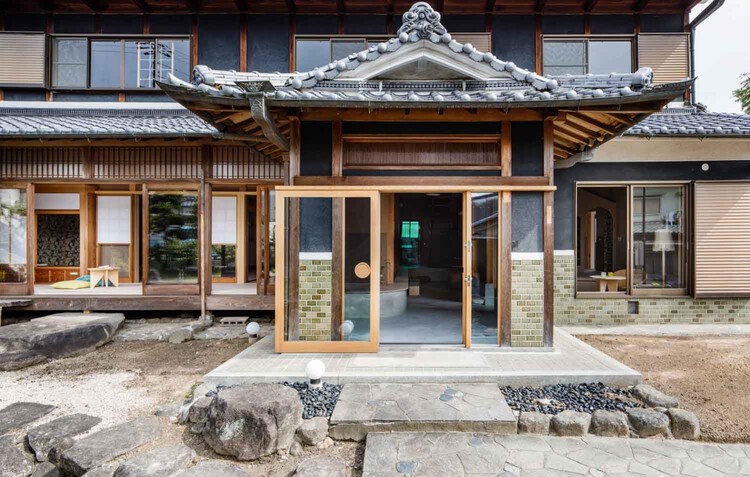 Text description provided by the architects. The site in Ikaruga Town, Nara Prefecture, is located in a quiet and natural environment surrounded by the river, which was carved by the Tatsuta River, which is a tributary of the Yamato River, on Mt. Mimuro, a small hill. It is an area where you can feel the taste and history of the old-fashioned tiled roofs, but there is a danger that the scenery will change drastically in a few years due to mini-development in some places.

Encounter with the existing house ‒ At the time, I was looking for land to build a new house at the request of land search. When I couldn’t find the land I wanted, I met this house, which had been vacant for a long time. This 40-year-old existing house had a vitality that did not make you feel like a vacant house. The fact that it was carefully built and that it lived carefully was conveyed through the existing house. Fascinated by such an existing house, the client chose this place himself. The approach from the road is narrow due to the shape of the flagpole-shaped site, but because the site and the building were large enough, we decided to renovate only the first floor into a residence and nail salon due to budget constraints.

The existing dwelling had a south-facing floor plan based on the “TA-NO-JI”, and the Japanese-style room with a “BUTSU-MA” was capable of holding ceremonial occasions. This is a typical form found all over Japan, and is often found in houses built by carpenters by around 1975. The main entrance is for guests, and on a daily basis, the family goes in and out of the entrance called “OKATTE” on the backside. The sunny “TA-NO-JI”‘s 4 rooms were not used on a daily basis, but only for guests, and the family used the kitchen on the north side and the drawing-room on the south side as places of living.

In this way, the public and private areas were clearly separated in the house, with the public on the front and the private on the back. There is a hierarchy in which the public ranks high not only in the sunlight and orientation, but also in the structural materials such as decorations and pillars, and it was built with a focus on the public. With the times, when the ceremonial occasions were no longer held at home due to the nuclear family, the aging of the region, and the emergence of ceremonial occasion companies, the “TA-NO-JI” form gradually disappeared. After that, the number of small urban dwellings centered on nuclear families began to increase, and the floor plan changed to center on the place of life for the family.

In this plan, by moving the private space for the family, which was only on the back, to the public special space on the front, the public and private are reversed, and the residence that focuses on the family life is created.

Thu Jul 14 , 2022
(The Magazine Plus Editorial):- Houston, Texas Jun 16, 2022 (Issuewire.com) – The House Manager, which recently launched its new subscription-based handyman services in Houston TX, is receiving positive feedback from customers. Sarah Cuddy, one of its first customers to enroll, gave a new service a glowing review. Cuddy, who previously used The […]