The Inflation Reduction Act (IRA)—the biggest climate bill in US history—will help push more Americans toward solar panels, electric vehicles, and renewable energy sources. It may also change how people cook and do laundry: The bill sets aside $4.5 billion for the first-ever federal consumer rebates on electric appliances such as ranges, ovens, cooktops, and heat-pump clothes dryers.

The High-Efficiency Electric Home Rebate Program will help shift more people away from gas-powered home appliances, said Ari Matusiak, chief executive officer of Rewiring America, a nonprofit research and policy group focused on energy efficiency. “It really is a transformative deal,” he explained. Depending on your eligibility, the rebates could cut thousands of dollars off the cost of purchasing and installing electric appliances over the next decade.

But don’t rush to buy anything right now. Unless your range or oven just broke, you should wait until the rebates (which are state-run) become available, in mid- to late 2023. What should you do to prepare? Follow these five steps, which will help you maximize your savings when it’s time to buy.

Determine your eligibility for rebates

The High-Efficiency Electric Home Rebate Program was designed to make switching from gas to electric more economical for many people, including those who can least afford it, Matusiak said.

The IRA appliance rebates will be available to households making up to 150% of their local area median income, a number calculated every year by the US Department of Housing and Urban Development. (You can find your area median income with this tool.) The rebates (which can be used only once per household) should be deducted by a retailer or contractor when you buy or install your appliance, instead of requiring you to file for a refund. They could also apply to rewiring work or ventilation.

The rebates are capped at specific dollar amounts: Those eligible could get up to $840 off the cost of an electric or induction range or cooktop, an electric oven, or an electric heat-pump clothes dryer with Energy Star approval. For installation and electrical work, the rebates cover up to $500 for contractors; up to $1,600 for insulation, air sealing, and ventilation; up to $2,500 for upgrades to your electric wiring; and up to $4,000 for an upgrade to your electric load service center (the box that holds your circuit breakers and distributes electricity from your utility).

To help people navigate the numbers, Rewiring America created a calculator to show rebate possibilities based on your household income and size, your zip code, your tax filing, and whether you own or rent your home.

The IRA’s appliance rebate programs also apply to landlords and builders of multifamily buildings where at least 50% of the residents are low- or moderate-income households, as well as to those living in US territories, such as Puerto Rico, and to federally recognized Indian tribes. If you rent your home, you may be able to ask your landlord to replace an old gas stove with an electric or induction model in the coming years, especially as more cities pass legislation that limits the installation of gas appliances.

Run by state energy offices, the rebate programs will likely take about a year to create, according to Brian Lips, an energy policy expert for the NC Clean Energy Technology Center and manager of the Database of State Incentives for Renewables & Efficiency (DSIRE). But there’s no guarantee that your state will offer the full amount or range of rebates, he said. Although the Department of Energy leads the programs, each state will have its own version. Some states could give rebates for less money to more people or offer rebates only on certain appliances, such as a heat-pump clothes dryer, all of which would be tracked by DSIRE.

Wait to buy (but not too long)

If possible, hold off on buying or installing a new electric kitchen appliance until 2023—especially if you’re eligible for rebates. We don’t yet know whether states will allow for retroactive reimbursement if you purchase an electric appliance now, before the new programs debut. (It may be possible, considering that the rebates legally took effect when the bill was signed, said Whitney Potter, deputy chief of staff for Senator Martin Heinrich of New Mexico, who was instrumental in creating the rebate programs.) So if you do need to buy an appliance now, check DSIRE for existing rebates and credits and save all of your paperwork and receipts.

Even if reimbursements come through, you should still wait. The IRA’s rebates, which apply at the time of purchase or installation, are easiest for buyers, Lips said. Because they also cover installation and electrical work, your store, installer, or contractor could potentially manage the whole process for you, including confirming your eligibility and deducting all of the rebates before you pay.

You may be tempted to wait as long as possible to use a rebate over the next decade. Matusiak and other industry experts predict that the increase in demand for electric appliances due to the IRA programs will lead to more supply and will eventually lower prices and spur creativity in the kitchen appliance industry, especially in induction electric cooktops. (We’ve found that induction models are better for cooking than traditional radiant electric versions, but they have remained more expensive, even the lowest-end models.) But Lips counsels against putting off a purchase for too many years: Even though the rebate programs are set up to last until September 30, 2031, the money allocated to each state may run out before then.

Also consider that because of current supply-chain issues and the housing boom, it’s already taking months to get appliances delivered or to find a contractor or the right materials to have work done on your home. The rebates will likely add to both the demand and the delays—another reason to begin the process sooner rather than later.

If you’re not eligible for the IRA kitchen appliance rebates, or if your state program doesn’t cover the electrical appliance you need to buy, you may have alternatives. You could still qualify for new IRA tax credits under the Energy Efficient Home Improvement credit (25C on tax forms). You may be able to deduct up to 30% of the costs for work on your electric load service center (up to $1,200).

Although eligible households can use IRA kitchen appliance rebates once, the 25C tax credits are available to most people and can be applied every year from 2023 until they expire in 2032, Potter explained. Tax credits can even be applied to the remaining costs after an IRA rebate is deducted.

You could also still qualify for other rebates from the IRA, or electric kitchen appliance rebates from your electric utility, city, or state, Lips said, adding that IRA rebates and tax credits can be layered with these alternative programs. Lips recommends checking DSIRE occasionally before you buy, whether or not you qualify for an IRA rebate or if you need to purchase an appliance before the programs begin. He also recommends talking to your accountant or making sure your tax software includes up-to-date information on the new bill.

You might also consider working on other electrification or energy-efficiency upgrades inside your home over the next decade, including adding a heat pump or insulated windows (both of which are also eligible for rebates or tax credits through the IRA). The Rewiring America calculator can give you an idea of what you might save on other purchases or home improvements.

As you research rebates and tax credits—and wait for them to kick in—take a good look at your kitchen and laundry-room appliances to determine what to upgrade first. Ask yourself some questions: How old are your appliances? Are they gas or electric? How well are they working for you? What do you need (or want) to replace first?

In addition, find out what other work you might need to do to prepare to switch to electric appliances. This work could include electrical upgrades or changes to your ventilation, and it may require speaking with an installer or contractor.

This is also a good time to get familiar with appliances that will fulfill the requirements of the IRA rebate programs. If you want to use a rebate on a clothes dryer, it must be an Energy Star–approved heat-pump clothes dryer. If you plan to buy one, consult the Energy Star product finder. (Our research has shown that electric heat-pump dryers are far more efficient than regular vented dryers. However, we haven’t fully vetted them in the past, in part because they have cost more and tended to be slower to dry clothes. We plan to test and review them more thoroughly in the near future.)

A representative for the Environmental Protection Agency told us that the agency hopes to add the Energy Star certification for induction cooktops only (not ranges) sometime in 2023, at which point you’ll need to buy an Energy Star–approved cooktop with a rebate. Before you buy, be sure to check the Energy Star product finder to see whether such models have been added.

Get comfortable with electric and induction cooking

There are many good reasons to ditch your gas cooking appliances for electric models, specifically those that heat with induction. Gas stoves have been shown to be potentially risky even with ventilation, in part because they emit benzene and methane. Induction also outperforms gas when it comes to energy efficiency: A representative from Energy Star, the energy-efficiency certification program run by the Environmental Protection Agency, told us that induction cooktops are the most efficient at transferring heat to your food, running at about 85% efficiency. Traditional radiant electric cooktops are next (75% to 80% efficiency), while gas ranges are only 32% efficient.

Our own research and testing shows that induction cooktops or stoves with an induction cooktop are safer to cook with than gas or electric stoves. It also shows that they are much better and easier to cook on than traditional electric versions, and that they are as flexible to cook on as gas stoves—if not better in some applications. (We plan to test more induction cooking appliances soon.) For this reason, we’ve concluded that our previous guidance to hang on to your gas stove for as long as it works is no longer the best advice, even if you just bought it. If you qualify for a rebate, it makes sense to begin the switch to electric models—especially induction, if possible—as soon as the rebate programs are available and you can afford the additional costs.

One reason induction cooking has taken so long to catch on with those who are accustomed to using gas is that it doesn’t emit heat or flames. Cooking over a smooth glass surface is just not the same as cranking up the gas to char a pepper or to heat a cast-iron pan until it’s smoking hot. There is a learning curve to induction, though it’s less difficult than you might expect. If you’re curious about induction but not ready to commit to a full-size induction cooktop, consider buying a portable induction cooktop, which costs less than $100 and will give you a feel for cooking on such appliances.

Rewiring America’s Matusiak said his own parents recently made the switch from gas to induction and that they were skeptical of how well it would work. “And as soon as they got it, they said, ‘Why didn’t we get this years ago? Because it’s so much better.’”

This article was edited by Ingrid Skjong and Courtney Schley.

Fri Sep 9 , 2022
A group of George I gold coins, part of a trove discovered in the subfloor of an 18th-century home (all images courtesy Spink) In the Ellerby area of North Yorkshire in the United Kingdom, one couple engaged in renovations on their 18th-century home struck the jackpot in 2019, finding a […] 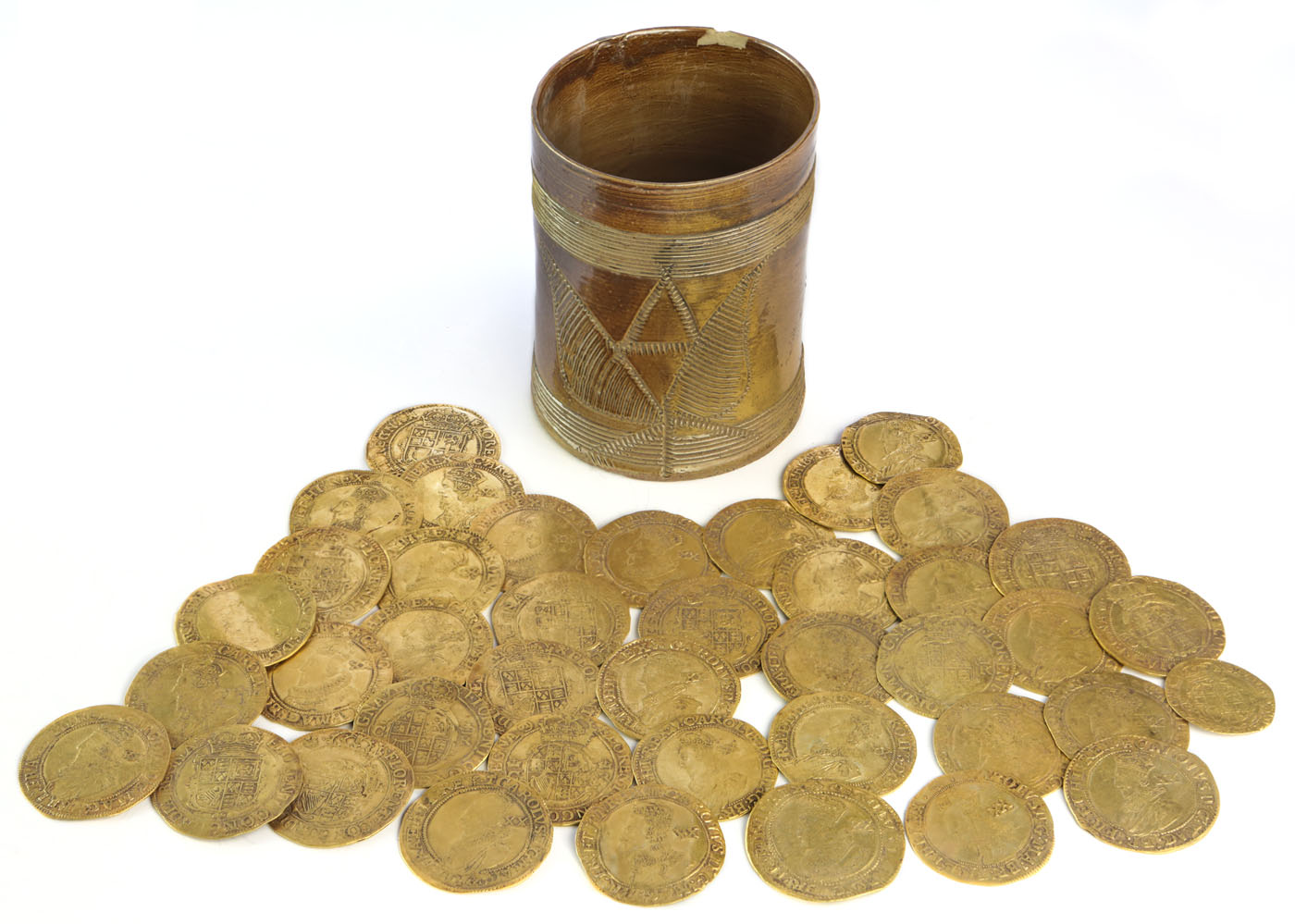