RICHMOND — What could have been a sleepy special election for a single legislative seat in Virginia Beach has instead drawn heaps of money and national attention — in large part because of abortion.

Leaders on both sides of the abortion debate claim that whoever wins the state Senate seat in Tuesday’s election — in which an abortion rights Democrat will face off against a Republican who favors a 15-week ban — will play an outsize role in shaping Virginia’s laws on the subject.

The election, to fill the swing-district seat vacated by Republican Jen A. Kiggans after she was elected to Congress in November, occurs against the backdrop of a proposal by Gov. Glenn Youngkin (R) to ban the procedure in Virginia after 15 weeks of pregnancy, with exceptions for rape and incest, and to preserve the mother’s life.

But Youngkin, a potential 2024 presidential candidate, has hinted that he is willing to go further. At a gathering in June to celebrate the Supreme Court’s decision to overturn Roe v. Wade, the landmark ruling that had legalized abortion nationwide, Youngkin said he believes life begins at conception, and he said he would “gleefully” sign “any bill [to protect life] that comes to my desk.”

Abortion is banned or under threat in these states

Virginia allows abortion through the second trimester, about 26 weeks, and in the third only if the mother’s life or health is at serious risk, as certified by three doctors.

Facing off in the Senate race are Republican Kevin Adams, 61, a retired Navy lieutenant commander who runs a home-improvement business, and Democrat Aaron Rouse, a former NFL player who turns 39 on Sunday, runs a youth-focused nonprofit and served four years on the Virginia Beach City Council.

Rouse, who has two children, has made defending abortion access a marquee campaign issue, with two of his three TV ads focused on the topic. Adams states on his campaign website that he supports Youngkin’s 15-week plan, but he has not focused on abortion, preferring to emphasize public safety and veterans issues.

Adams’s strategy has not stopped antiabortion groups from pouring money and attention into the race on par with what abortion rights groups are showering on Rouse.

“It seems everybody has got their eye on the Adams-Rouse race,” said Old Dominion University political scientist Ben Melusky.

The campaigns have raised close to $1 million apiece since November — eye-popping sums by the time-constrained standards of a special election. By comparison, Kiggans spent $1.5 million to win the seat in a regular election in 2019, and her opponent, Cheryl Turpin, spent $2.4 million.

Democrats are especially eager to make the election about abortion, Melusky said, after that issue helped drive turnout during midterms around the country in November and powered the party to a better-than-expected showing. In Virginia’s 2nd Congressional District, Kiggans beat incumbent Democrat Elaine Luria by a narrower margin than was predicted.

Kiggans trailed Luria by four percentage points in the precincts that lie in the state Senate district that Kiggans had represented, true swing territory that includes two Norfolk precincts, according to analysis by the nonpartisan Virginia Public Access Project. Exit polling in the congressional race showed that abortion “jumped up as the number two most important issue for voters … right after the economy,” Melusky said.

The Virginia Senate will remain under Democratic control no matter which candidate wins, so it is not clear that Youngkin could muster the votes for a 15-week ban even if Adams prevails. Democrats would have the same 21-19 advantage they had when Kiggans occupied the seat if Adams replaces her, and a 22-18 edge if Rouse wins.

But the outcome could be consequential, given the narrowness of the Democrats’ majority, the presence of a wild-card Democrat, Joseph D. Morrissey (Richmond), who is open to some abortion restrictions, and the power of Lt. Gov. Winsome Earle-Sears (R) to break most ties.

“In a state with very slim majorities in the House and Senate, every race matters,” Victoria Cobb, the president of the conservative Family Foundation of Virginia, said in a text message Thursday to The Washington Post.

On that point, Cobb was in rare agreement with Rae Pickett, spokeswoman for Planned Parenthood Advocates of Virginia, who wrote in an email Jan. 3: “With our state senate almost evenly divided, every single elected official is critical to our health and rights.”

Rouse puts the issue front and center in a TV ad that opens with footage of the former football safety making a play for the Green Bay Packers.

“When I was in the NFL, my job was to be the last line of defense,” Rouse says into the camera. “Right now, that’s what we need in Richmond. Extreme Republicans are trying to take away the right to choose in Virginia, rolling back women’s freedom to make their own personal medical decisions.”

In another ad for Rouse, a female narrator warns: “Kevin Adams would be the deciding vote to ban abortion in Virginia. But your vote can stop him before it’s too late.”

Adams’s campaign has not emphasized abortion as an issue, instead leaning heavily on his military background.

“Supporting Our Veterans” is the only issue headline on the homepage of the Adams campaign website. In a list of platform priorities that starts with jobs and economic issues, abortion comes last, under the heading “Life and Families.”

Adams says on the site that he supports Youngkin’s effort to seek a ban after 15 weeks of pregnancy and including the exceptions for cases of rape or incest or when the life of the mother is at risk.

“My wife and I have been blessed to volunteer at pregnancy resource centers, where we’ve been able to counsel young women — and young men — on how they can choose life,” Adams writes on the site.

In a recent interview with WAVY-TV 10 in Hampton Roads, Adams emphasized law and order. He repeatedly has sought to cast Rouse as soft on crime, something Rouse disputes. In November, the Republican Party of Virginia tweeted a video of Rouse saying during a speech that “the similarities between the slave patrols and modern American policing are too salient to dismiss or ignore.”

Virginia Beach has struggled with issues of race in policing, particularly over the shooting death of a young Black man — Donovon Lynch — by a police officer in 2021. The state Republican Party said in a statement that Rouse’s words on the subject show “that he has no respect for the rule of law and is unfit to represent the honest, hard-working men and women of Virginia Beach.”

Adams has picked up the theme in a campaign video ad in which he says that “Aaron Rouse thinks cops are racists. He’s a radical who will make Virginians less safe.”

“It is imperative that we fund our police and make sure that they have the resources to combat crime,” Adams told the station.

That message is designed to resonate in an area with a high concentration of military voters, active duty and retired, and is still reeling from a mass killing at a Virginia Beach municipal building in 2019 as well as a mass killing at a Walmart in nearby Chesapeake in November.

In an interview with The Post on Thursday, Rouse said he made the “slave patrols” comment in the aftermath of the “horrific murder” of George Floyd by Minneapolis police in 2020. He said he helped secure pay increases for Virginia Beach police as a council member and worked cooperatively with police and other first responders on community-policing initiatives and through his nonprofit.

“My relationship with and my support of law enforcement will always be solid and sound,” he said.

Adams has also emphasized tax cuts for military veterans, which aligns with action the General Assembly took last year to exempt a portion of military pensions from state income tax. Youngkin is pushing this year to extend that tax cut and has campaigned with Adams in Virginia Beach.

Aside from abortion rights and health care more broadly, Rouse has said he would focus on education, the economy and public safety. Some of his proposals include pay raises for teachers and police, expanded preschool, affordable housing and improved job-training programs.

White contractors wouldn’t remove Confederate statues. So a Black man did it.

For all their political differences, Rouse and Adams have some things in common, including up-by-the-bootstraps biographies. Both are Black men and describe themselves as having been raised in “the projects” by single mothers.

In one of his TV ads, Rouse describes his rise from humble origins and promises to make “life more affordable for Virginia families.”

In an interview with The Post, Rouse said he was born in Norfolk and raised, along with three siblings, in Virginia Beach. He said he started helping to support the family at age 10 by mowing lawns, after the death of his grandmother, a house cleaner who’d helped out financially.

“We couldn’t afford college. It wasn’t something we even talked about,” he said. “It just so happened the good Lord blessed me with football talent, and I was able to turn that into a full scholarship to Virginia Tech.”

Rouse completed his degree and was drafted by the Packers in the third round of the 2007 NFL draft, playing three years in the league. Returning to Virginia Beach, he established a nonprofit, Rouse’s House, that helps support local families with school supplies, winter coats, holiday meals and toys.

Adams was born in Salisbury, Md. He and his wife have nine children, some of whom work in the family business, Adams Family Handyman Services. Adams’s campaign declined to make him available for an interview and referred a reporter to his website and a television interview.

The winner of the election will serve the final year of the four-year term that Kiggans began in January 2020. The contest is one of three special elections taking place the day before the General Assembly begins its annual session Wednesday, but it is the only special election involving the closely divided Senate.

The other election is for the seat last occupied by Del. Ronnie R. Campbell (R-Rockbridge), who died in December. Vying for that seat are Campbell’s widow, Republican Ellen Hamilton Campbell, and Democrat Jade Harris, who has served as vice mayor of the town of Glasgow in Virginia’s Rockbridge County.

Sun Jan 8 , 2023
It’s no secret that kitchens are 1 of the most well-liked spaces in homes. If your kitchen is dated or no extended matches your life-style, you could want to contemplate remodeling. An upgraded or modern-day kitchen also can maximize the price of your property. According to Zonda’s modern Price tag […] 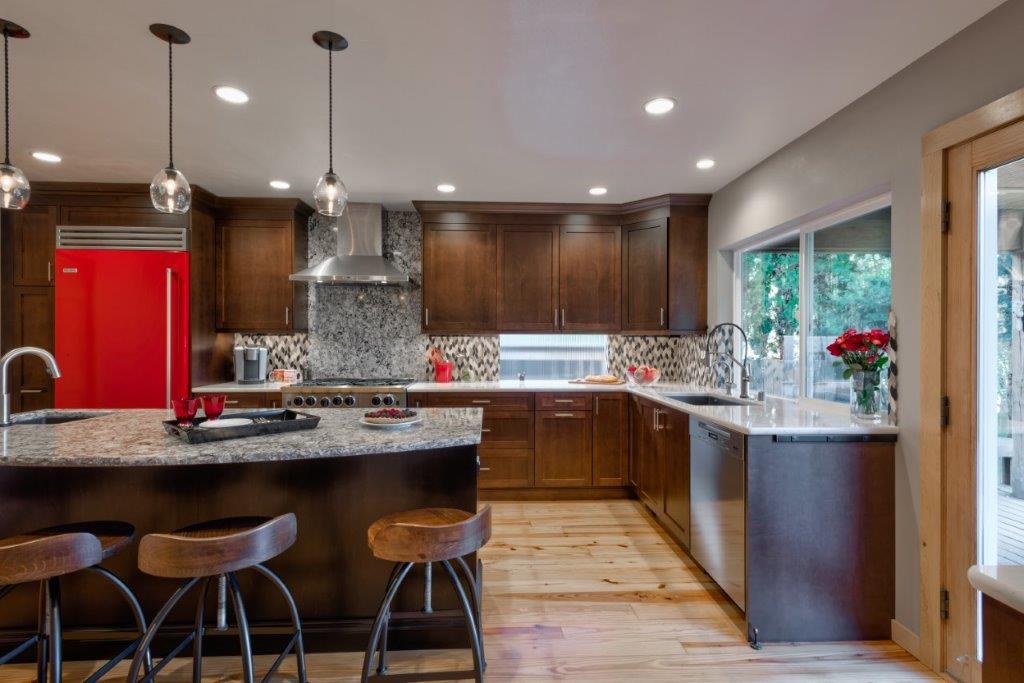